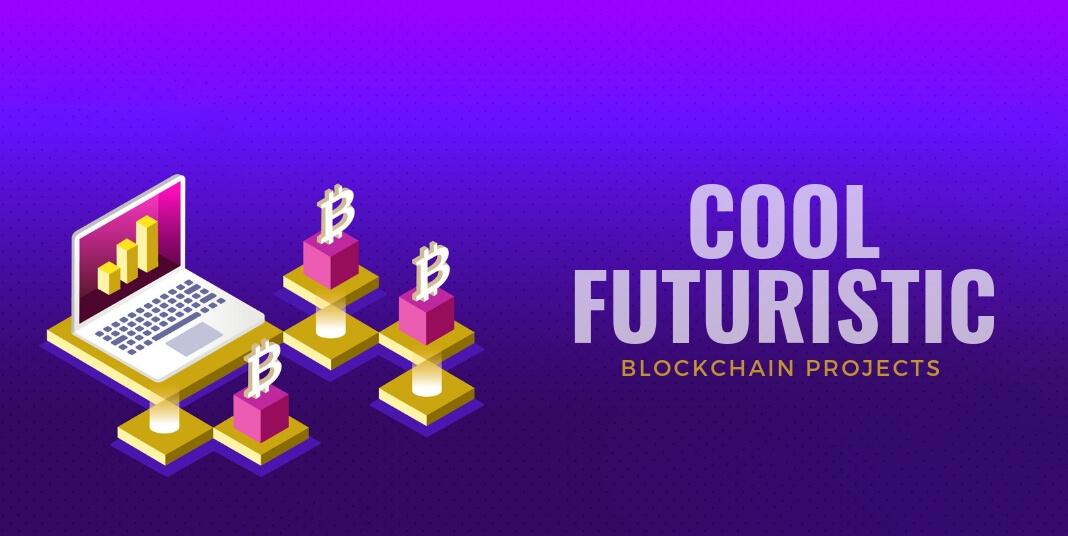 Over the past few years, blockchain has taken over the world. Currently, the blockchain technology is utilized in messengers, payment systems, shopping applications, gaming and gambling platforms and many such things.

The technology is steadily spreading and the adoption is coming in substantial ways.

Before we dwell into some of the cool futuristic blockchain projects, we’ll talk something about the blockchain technology and few of its benefits.

What is Blockchain Technology?

Blockchain is an invention that is bringing in a revolution in the global business market. The evolution of the technology has brought with it a great platform not only for businesses but to beneficiaries as well. But ever since the inception of this technology, people around the world are still unclear of its operations.

In simple words, Blockchain technology acts as a platform that transports digital information without the risks of being copied. It is a kind of algorithm and data distribution structure for the management of digital cash without requiring any centralized administration such as banks, government or financial institutions.

The technology is programmed to hold all financial transactions and all such things that carry some value.

The Blockchain technology works as a Distributed Ledger Technology(DLT) that was initially designed to support Bitcoin. The technology was later used in things that are more productive.

Blockchain works similarly to a spreadsheet; data is reconciled from time to time with the information stored on the sheet.

Here are two of the most cool futuristic blockchain projects

Waltonchain is a project that is fused with blockchain technology and Radio Frequency IDentification(RFID) technology to enhance the supply chain management.

Waltonchain is soon to reach the mass production of the first hardware chip, along with two more chips with different features that are about to follow suit in a couple of years.

These chips are to be planted in companies products that work with Waltonchain, helping the products turn into smart objects that can transfer data.

The data will be stored and collected under the Waltonchain’s decentralized ledger, and the process will be automated through smart contracts.

The companies that integrate with Waltonchain can track the movement of all of their products. Once the solutions are adopted entirely, the whole of supply chain management can be monitored and managed with a significant increase in efficiency in comparison to the supply chain process.

IoTA is a distributed ledger that is designed to execute and record all the transactions between machines in the system of the Internet of Things(IoT).

The focus of the IoTA foundation is to develop the next generation of protocols for the connected world.

It is built on a customized version of a Distributed Acyclic Graph(DAG) called Tangle. Tangle is a structure of the database that does not have blocks, chain and not even miners. Although, the transactions on the IoTA network is entirely free of cost, but paid for verifying previous two transactions.

The IoTA blockchain project is still under the testing progress. The platform currently has participants that offer feedbacks; it had hit a few bumps shortly after the launch with the validation of transactions taking a lot of time.

The blockchain technology is ten years old now, and people still consider it to be in its early days; practical applications of the technology are continually developing and is overgrowing.

We could only mention two of the futuristic blockchain projects that promises development that use of blockchain technology to advance another set of progressing technologies.